Back to all posts

Joey Vee to Open the Show for Aaron Lewis at the Soundboard in the Motor City Casino! 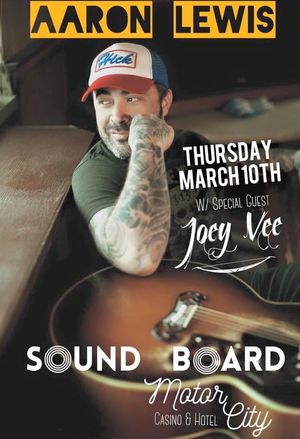 MotorCity Casino Hotel is proud to welcome Aaron Lewis Live In Concert, to Sound Board on Thursday, March 10, 2016 at 7:30 p.m.

Aaron Lewis is the Grammy Award-nominated lead vocalist and rhythm guitarist of post-grunge group Staind. In 2011, Lewis formally arrived in the country world with the release of his EP, Town Line. Highlighted by the success of the gold-selling single "Country Boy" and featuring the legendaryGeorge Jones and Charlie Daniels, the seven-song EP reached #1 on the Billboard Country Albums Chart and #7 on the Billboard Top 200. His first full-length solo album, The Road, was released in November 2012. Lewis has been ranked in the "Top 100 Heavy Metal Vocalists" by Hit Parader in August 2014. Lewis is currently working on material for his second full-length solo album, which he hopes to have released in early 2016.

Joey Vee (born in Warren, Michigan) is a country music artist. He has opened for Randy Houser, Due West, Krystal Keith, Lorrie Morgan, Ty Stone, and Lover Boy. In 2015, he was nominated for a Detroit Music Award for "Best Country Vocalist." Joey performs regularly in Michigan, Canada, and various surrounding states. He has also performed at the WYCD Downtown Hoedown (2012-2015). Joey is planning to release an EP in May 2016.

Tickets ($42, $35, and $32GA) now on-sale via Ticketmaster. To purchase tickets, please call Ticketmaster at (800) 745-3000 or visit www.ticketmaster.com. Tickets are also available through the Sound Board Box Office Wednesdays, Fridays, Saturdays, Sundays, and on show days.

SOUND BOARD, an intimate live performance venue is located at MotorCity Casino Hotel. The venue features four bars and several private suites that are available to create an unforgettable live entertainment event. Free and convenient valet and self-parking are available.